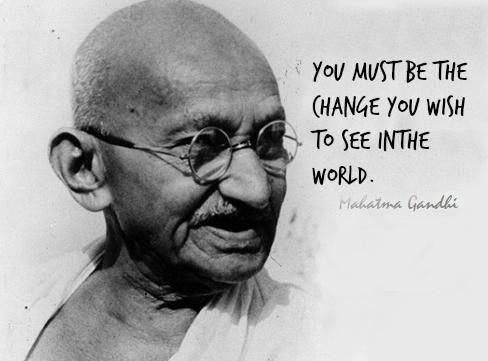 Just Mercy: A Challenge to Be the Change You Want to See in the World

During the 2016-17 school year, the year before I started teaching at my school, the entire student, faculty, and staff read the book Just Mercy, and Bryan Stevenson, the author, came to speak. I knew very little about the book when I started reading it. I just knew that it was a part of the school culture still last year. Students and colleagues would make references to it, and I just felt like I was missing out on something.

Each year, we are asked to set some goals for ourselves professionally. Reading Just Mercy and reflecting on it was one of my goals. It’s not a book about education, per se. It’s also not a very easy read content wise.

If you haven’t ever heard of it, it’s about Bryan Stevenson’s experiences and a brand new lawyer in Alabama and how he worked with inmates on death row. It’s somewhat ironic that I finally make time to write this post on the day that Pope Francis came out and declared that the death penalty is inadmissible in all cases. (Side note: I teach at a Catholic, Jesuit school. I have only ever taught in Catholic education. So you will see a bit of that influence sometimes in my blog.)

I definitely thought that Just Mercy was a book on Ignatian education when I chose it. I had read nothing on it. I had no idea what it was really about until I tackled it this summer even though it had been on my bookshelf for a good portion of the school year.

That said, when I started reading it, I was trying to figure out something that was twofold: how did I want this book to affect my teaching, and how do I use it with students who have never read it since I teach freshmen and sophomores?

Luckily, I didn’t have to think too hard in trying to answer this question. My immediate thought was that now I know why CJ in A Soldier’s Play by Charles Fuller committed suicide more fully. Fuller gives enough details in the play to show why wrongful imprisonment would mess with CJ’s mind. Reading Stevenson’s book gave me even more information, though. While I would like to hope that every case with a black man and every prison isn’t like the prisons that Stevenson writes about, I have to think there’s more truth to what he experienced as a lawyer than we know about. The deep hatred and prejudice even in recent history taints so much of our justice system in the United States.

While the character CJ loved open fields and felt caged, it was enlightening to know about the subculture in the prisons themselves and think about what other things CJ may have witnessed or experienced personally as he awaited for a trial and how some of those events could have driven him to take his own life.

My freshmen read Black Boy by Richard Wright, and while Richard doesn’t experience incarceration, he has a real fear of the justice system and whites in parts of the book. The more I read about wrongful incarcerations, incarcerations of mentally ill, and trying young teens who committed crimes as an adult where they get sentences for the death penalty I am reminded of that this was definitely part of normal life for him in the South. If blacks didn’t experience this level of injustice personally or in their family, they heard and knew stories about someone who did.

It is disturbing how fragmented our country is and how blind some people are still to injustices today. When I teach Things Fall Apart, I use Chimamanda Ngozi Adichie’s TED Talk on “The Danger of A Single Story”. She talks about how important it is to have multiple narratives. She speaks iniitally about new narratives in Africa that aren’t from a white perspective, but her sentiment is true here, too, for stories  about modern America. I am reminded of Adichie’s talk because even though Stevenson’s book is a memoir of sorts about his experience, it provides another lens and story to something so familiar to many.

One case in Stevenson’s book takes place in Monroeville, Alabama, the city that was home to Harper Lee and that the town of Maycomb in To Kill a Mockingbird was based on. Stevenson’s case and profile of a wrongfully accused man from there struck a deep chord for me, particularly because of where his case took place. I grew up loving To Kill a Mockingbird by Harper Lee. I even have an Australian Shepherd named Scout. I want to think of the world today being a better place than it was for Tom Robinson in that book. (Side note: The mixed reviews on Lee’s new book, Go Set a Watchman, have kept me from reading it even though I own it. I am sad to see that Atticus may not be like the man in my head, although from reading Stevenson’s book, I’m challenged to see there could be more to one of my favorite heroes.)

Even though Atticus Finch loses Tom Robinson’s case in To Kill a Mockingbird, I love how he teaches his children it’s ok to be uncomfortable and that sometimes we are called to do hard things that are right. However, at the end of the book Tom Robinson still dies. He flees the prison. Like CJ in A Soldier’s Play, escaping the prison, even with those risks, is better than staying put. It forces us to ask: what were these characters experiencing or witnessing on the inside? Giving up on life or choosing to risk life, even when they knew they were innocent, was better than staying. Why?

I love reading and teaching works about social justice. I love stories about people who struggle and come out of horrible times and are able to see the world as a place of a hope and goodness. I’m constantly inspired by Holocaust survivors and authors of genocide like Loung Ung, author of First They Killed My Father. (Side note: I am so excited to be teaching that work again this year!)

Stevenson’s book was hard for me. Even those inmates who were released for their wrongful imprisonments struggled after their release. Release didn’t mean a happy ending. Their time in prison haunted them. While Stevenson and his team have made some huge victories in the justice system, the story is unfinished. We still have so much to do to change the world.

As I ponder what I want my students to get out of my reading of this text and how I want to relate this to so many of the other texts they will read this year, I am reminded of Gandhi’s words: “You must be the change you wish to see in the world.” Those words embody so much of what Ignatian education means for me.

I hope my students can read snippets of Stevenson’s text (or for that matter anything they are reading this year — thinking specifically of major texts my freshmen and sophomores will read, including Antigone, Things Fall Apart, The Ways of White Folks, First They Killed My Father, Kite Runner, Night, and A Soldier’s Play) and come to understand that the world still needs change and that they ARE the change. They are being called to be men for others, and sometimes it is uncomfortable, hard, and exhausting. And sometimes we don’t see the change we are fighting for, but if we follow Gandhi’s words, then our world can only get better.